Out of hours: At the beach with Nick Pumphrey

A 5am alarm – sometimes earlier. Pulling on the wetsuit, eyes half closed, as the first faint traces of monochrome light emerge. Rain, hail, raging gales or glassy calm, photographer Nick Pumphrey steps into the sea with his camera every morning while most of us are sleeping. Why? To get creative in the ‘blue hour’, connect with nature, calm his mind and capture the breaking dawn while floating in the waters around his home town of St Ives. 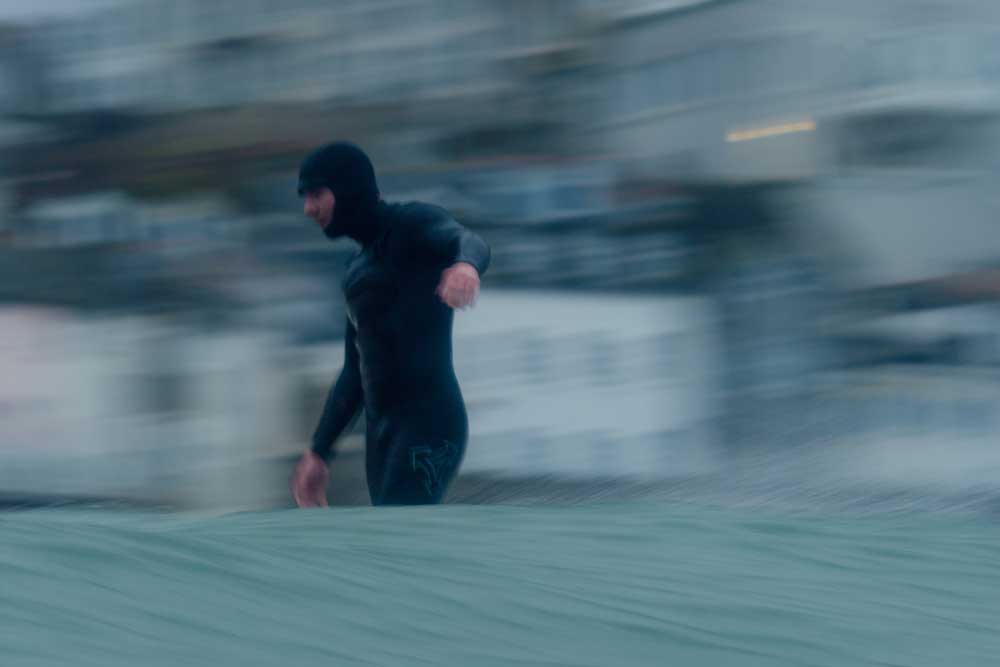 Before the pandemic, Nick travelled the world shooting for publications and brands including National Geographic, The Guardian, Roxy, Surfdome and Wavelength magazine. But immersing himself in the ocean on his doorstep every morning has sparked a new energy and insight he’s eager to share.

As part of our Out of Hours content series, we caught him one morning once he’d dried off, made a coffee and posted his 10 daily ‘Dawn Days’ images to his Instagram account. 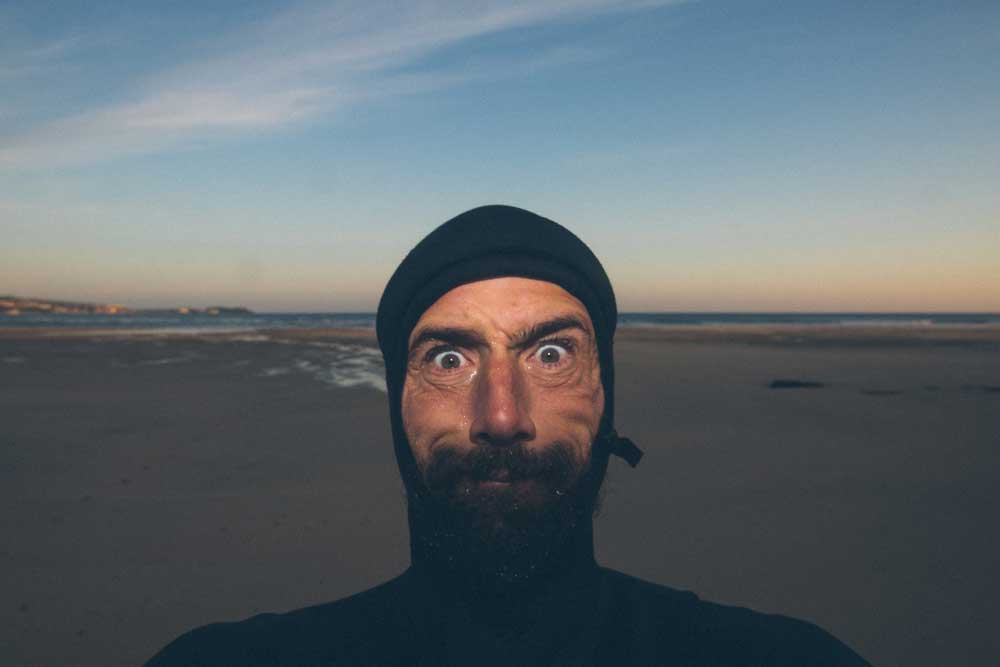 Dawn Days came about in the early stages of lockdown last year. I wasn’t feeling too good – not myself. I wanted to get rid of the anxieties that were clouding my thoughts. I read a few books on mindfulness and studied the Wim Hof cold water submersion breathing – and I had this idea that sharing pictures of the sea might lift people’s spirits.

There was no real brief, no expectations. I thought, I’ll get in the sea in the dark, see the sunrise, float, photograph whatever’s happening. Then share it. I wanted to keep the whole motive as simple and honest as possible. 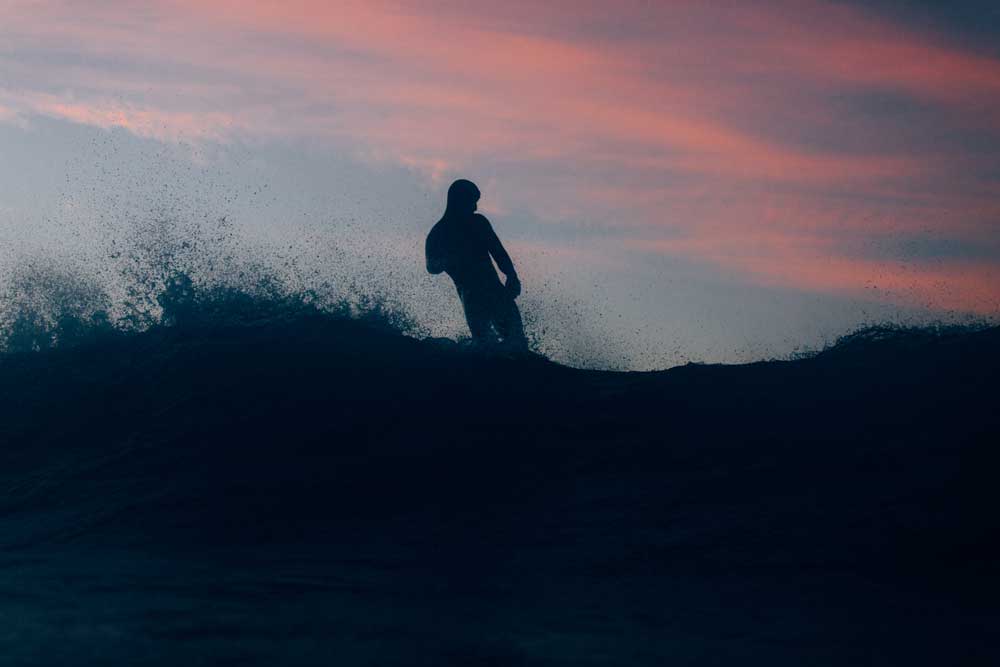 With the dawn wake-up calls, there’s always a bit of stubbornness, a resistance, there. But ultimately, I know I’ll feel better when I’m up – that it’ll be worth it. Once I’m on my feet and the wetsuit’s on, I’m not tired anymore. I haven’t missed a morning yet this year.

“I swim with my camera for my own sanity, I swim to share stories with fellow swimmers, I swim to be present and to connect with something much larger than myself.”

In the summer, it can be a 4am alarm to be in there for the blue hour. It drives you crazy chasing that first light. You get up and look out, and it’s like, ‘Oh no, it’s getting light already!’

The ‘blue hour’ is the hour before dawn, when you often get the best colours in the sky. I float there, literally just hooting out loud at these incredible colour displays above. You know it’s a good day when you’re hooting while shooting. 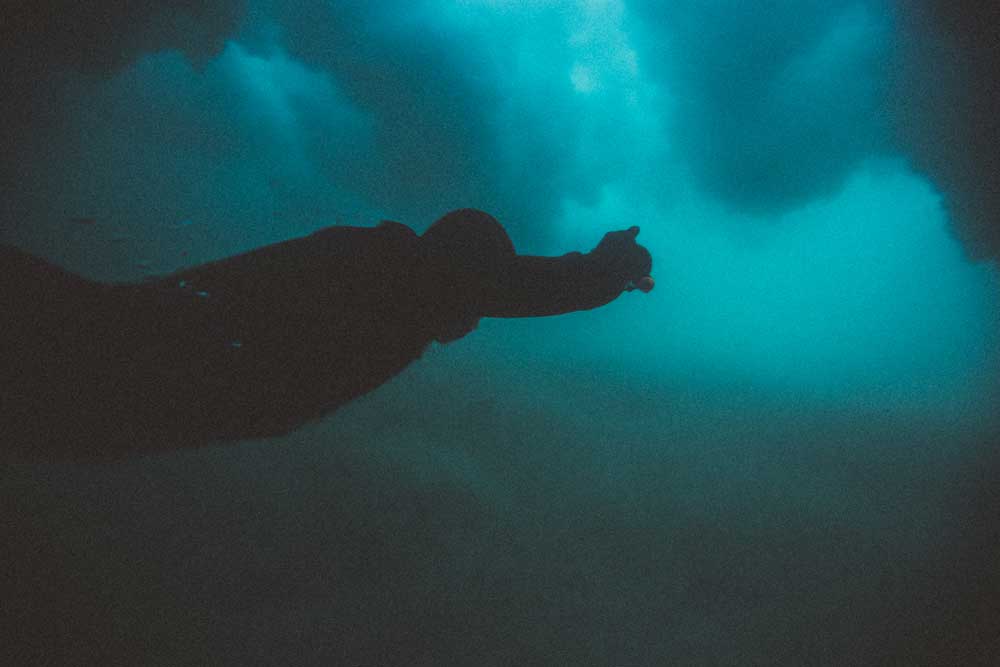 Various people have joined my dawn swims along the way, and it’s seriously improved their wellbeing. James Hardy – a great surfer, he’s been doing it with me every single day since January. When he started, he couldn’t sleep. He’d had really bad sleeping problems for years, but after 14 days in the sea at sunrise, they disappeared. Then there’s Lydia from Wild Swimming Cornwall. She was battling mental health issues, and then immersion in nature has completely sorted her.

We’ve been out in some pretty wild weather – sleet, snow, wind, big swells. No two days are the same. You’re connecting directly with nature – starting your day positively. Not to mention all the benefits of cold water. 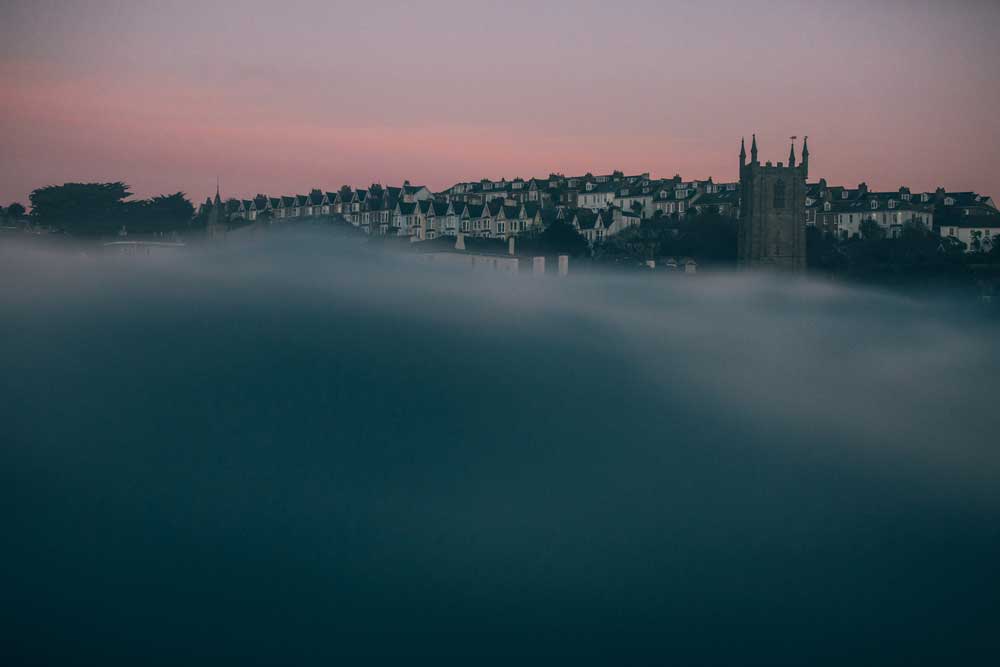 There was one Dawn Day experience that turned pretty heavy. I was at Godrevy, and there was a heavy sea fog. I couldn’t see the sea, but I could hear it. My ego was saying: ‘I have to do it, people are going to be expecting my 10 photos,’ when of course they’re not really. My gut was telling me no, but I kept going. Even in the water, the current was pushing me back towards shore. Eventually I got out there, but then I got caught in a current, and ended up 100 metres up by the cliffs. I looked in and thought, ‘the beach isn’t there anymore, it’s just a rock face.’ I was alright, the tide was OK and there was enough space for me to climb up and call it a day. But you know, I’m experienced, and I still got caught out. It taught me how important it is to listen to your instincts and respect the sea. 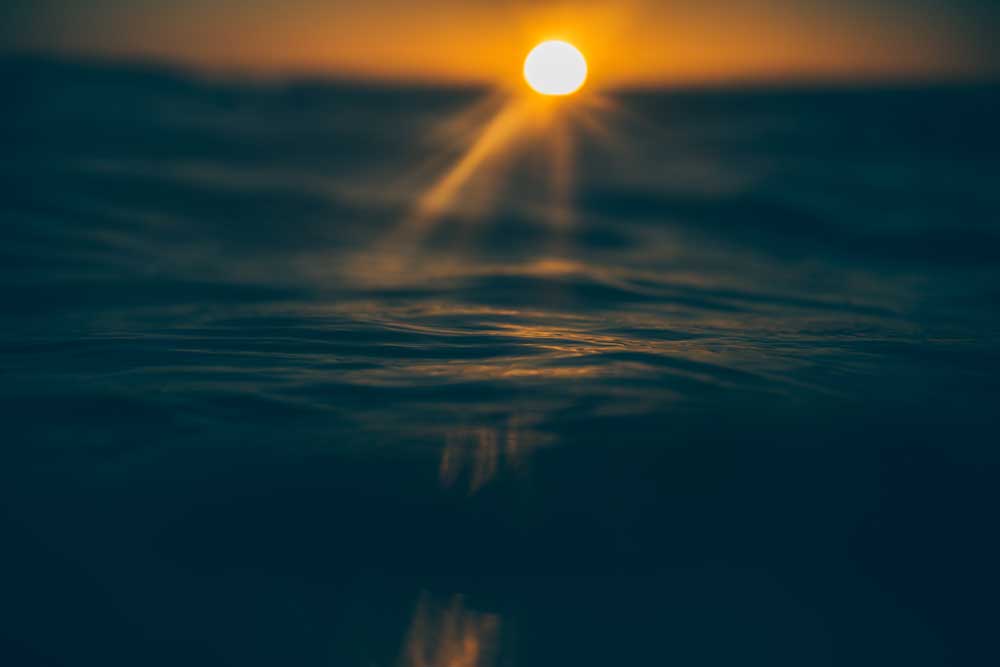 “The ‘blue hour’ is the hour before dawn, when you often get the best colours in the sky. I float there, literally just hooting out loud at these incredible colour displays above.”

Porthmeor Beach was my playground. We came to St Ives when I was 6 months old, so I’ve spent my life around the sea surrounded by creative folk. I started surfing at 12, and I’m 42 now. I suppose I’m naturally drawn to the water, because I always have this burning desire to be in the sea, or at least close by.

I’ve wanted to be a photographer for as long as I can remember, but I didn’t have the confidence to go for it at first. So I kept doing the ‘safe’ jobs to bring money in. It was only when I was 35, 36 – that I decided to properly give photography a go, 100%, without any compromise. Over the last 6 years or so, I’ve lived purely off my photography. I really believe if you go with those gut feelings and trust that it will work out, then it probably will. 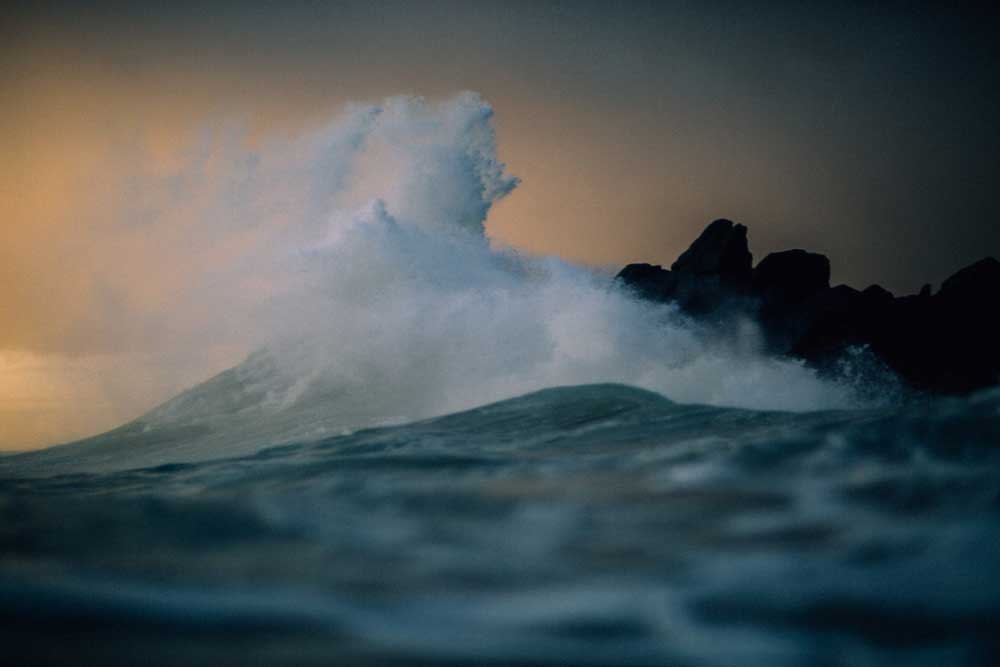 My sea photographs are a combination of intention and experimentation. On dark mornings, I normally start with slow exposure as that lends itself beautifully to the movement – the ‘whoosh’ – of the sea. There are days that don’t look particularly inspiring, but if you take a photo at half a second, or a second even, you get some unexpectedly beautiful results. I move the camera with the wave, take the picture – and give the camera a little jolt, and it just pulls everything up. I love the anticipation, the not knowing exactly how it’s going to turn out. There are no rules.

I enjoy going through my shots once I’m out and dry with a cup of coffee. The coffee, the edit and the music – I love it.

You get some mornings when the sun’s going crazy, the waves are pumping, the light is intense, and you’re just reacting to what’s happening in front of you. They’re the best days – when you’re totally present.

When I do the dawn swims there’s the connection to nature; to the energy of the sea and the power of the sunrise. You’re getting a big dose of natural light into your eyes first thing. These days, it’s usually the opposite, with people waking up and looking straight into a phone screen. I know I used to do that, but not now. 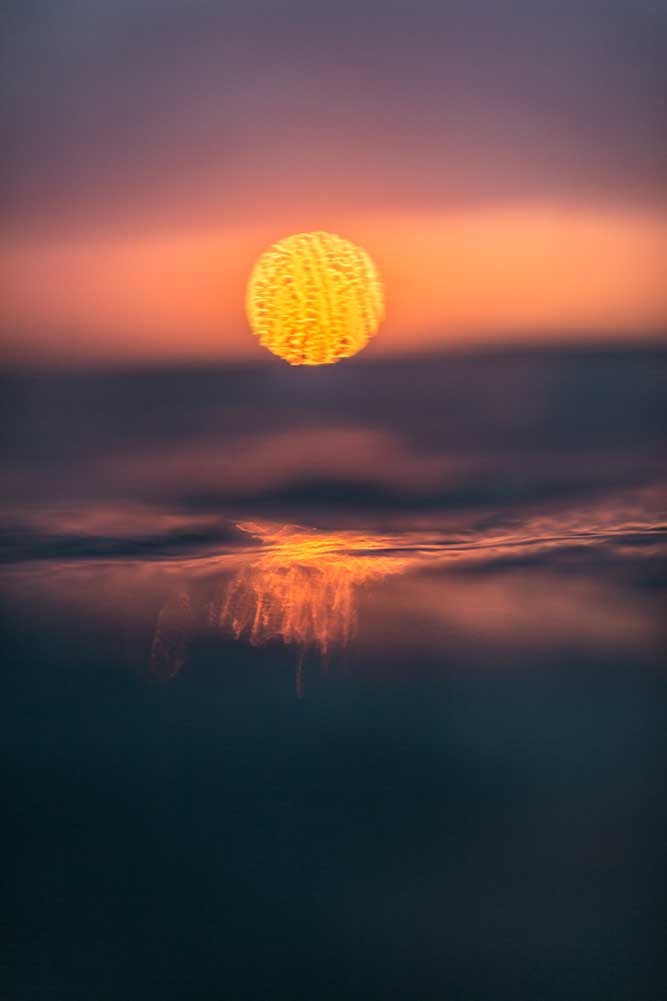 “I love the anticipation, the not knowing exactly how the image will turn out. There are no rules.”

There’s been an awakening during this last year. People have realised that being out in nature makes them feel better. Growing your own food, leaving the city – there’s been a huge shift, a move back to our roots. It’s positive, because when you appreciate and understand nature, you want to protect it. 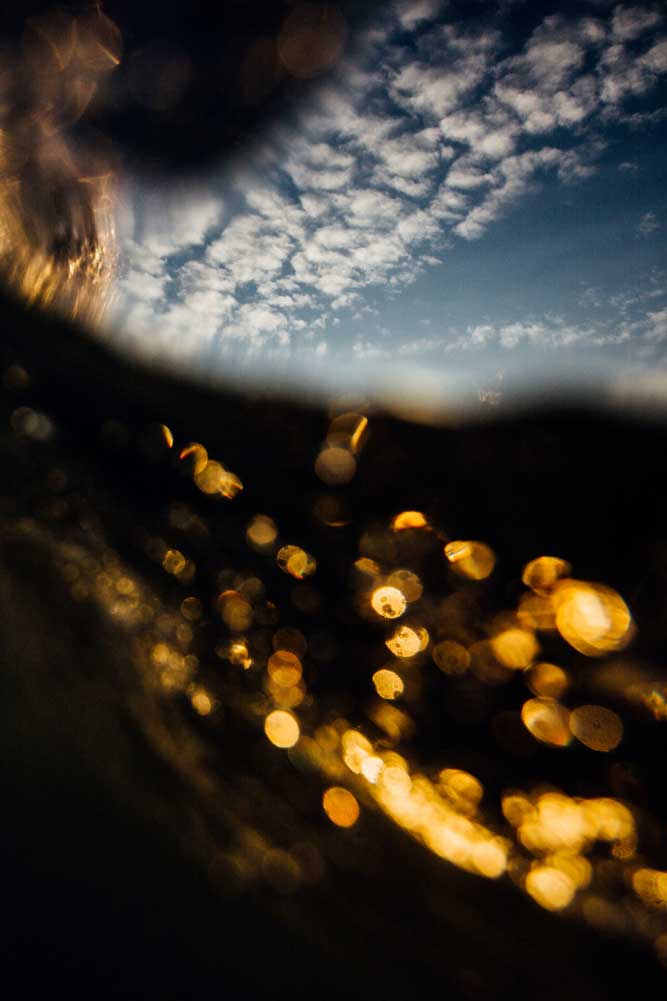 We’ve had some incredible encounters with wildlife. Every morning two little seal pups would come up and hang with us. They’re so inquisitive and innocent. I got a photo of one rubbing its head on James’ swim fin! We also witnessed a few gannet feeding frenzies, and schools of dolphins swimming by too.

This morning there was a white sunrise. It had an exotic, hazy feeling. When the sun finally showed itself it was this bright white ball – a bit like the moon. I took a few shots and then just put my camera down and looked at it. It was so peaceful. Really calm, no wind. It was just the oily textures of the sea and this white sun, with its reflection coming straight to me.

I’m not religious, but there’s a spiritual dimension to being in the sea at dawn. It’s like coming back to source, tapping back into how we were, how we’re supposed to be. It’s easy to see life as school, study, get a job, make money, buy a house – but ultimately, we feel at our best when we’re in these natural environments. You absorb energy from nature. It makes sense.