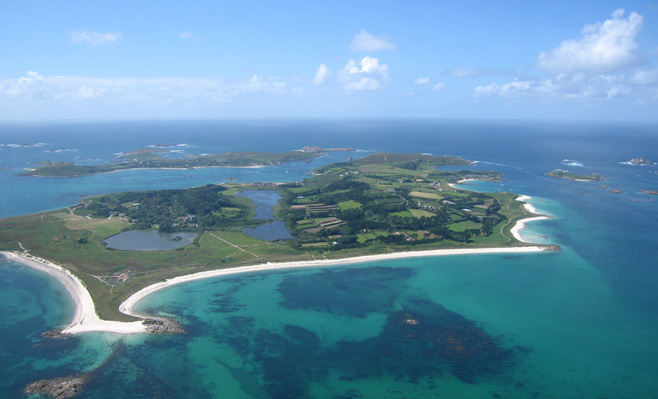 Visiting this tiny island (just two and a half miles long by one mile wide) takes a little more planning than the majority of places featured in this guide, but it really is worth the effort. Take a look at a photograph of Tresco taken from the air, and you’ll struggle to believe that it forms part of the British Isles – the sea is too blue, the sand too white.

Getting to Tresco involves a flight in a small plane (from Newquay or Land’s End) or a lengthy ferry trip from Penzance during the spring and summer, followed by a short hop on an inter-island boat from the main island, St Mary’s – but the journey itself is all part of the fun.

Arriving on St Mary’s, the pace of life instantly feels deliciously slower. Nowhere on the island is far away, so the need to rush seems to evaporate. Get to Tresco and your level of relaxation seems to deepen further still – the scaled-down feel of the island means there are fewer decisions to be made and a lovely absence of stress.

The famous Tresco Abbey Gardens are the big pull on the island. On a sunny day, wandering through the subtropical flowers and plants it’s hard not to suspect that you’ve travelled much further from the British mainland than the 28 mile trip you’ve actually made. It’s been likened to ‘Kew without the glass’. Clever planting and management has resulted in flora native to Africa and Australia flourishing on Tresco despite the island’s remote location in an often cold and stormy Atlantic. The Valhalla Museum (found in the Abbey Gardens) is filled with shipwrecked figureheads, testament to the dangerous nature of the waters around Tresco.

The handful of options for food and drink on Tresco include the island’s only pub, the New Inn, two cafes, including one within the Abbey Gardens, and the Tresco Stores, which has an exceptionally good deli and bakery section if the weather allows for a picnic.

Yes, it’s a fairly expensive and time-consuming business finding your way to Tresco, but it never disappoints once you’re there.